It was an honor to be chosen as Alison and Adam’s wedding photographer and we were looking forward to their wedding reception in Northwest Indiana.

I have always been intrigued by the Kennedys, and this interest was intensified on a trip to Cape Cod in 2005 where I got to catch a glimpse of the Kennedy Compound.  The stories of the modern-day Camelot, the style of Jackie O, and the drama of Jack and Marilyn are the stuff of legend.

So when our team from Joshua Albanese Photography arrived at Adam’s apartment the day of his NWI wedding to Alison, I was immediately struck by the resemblance between Adam and his brother to the famed Kennedy brothers.  And not only did they look the part, they acted the part too by playing some high-stakes card games while waiting for the festivities to begin.  Both Adam and Joe were handsome, charming, and (as evidenced by the speeches at the reception) charismatic guys.

This imagery was stuck so deeply in my head that at points during the reception, I actually called Joe ‘Bobby’ at one point in the evening.  He was kind enough to correct me – “Uh, my name is actually Joe,” to which I responded that I had been calling him Bobby in my head all day.  “You know, like the Kennedys.”  I’m pretty sure he thought I was insane.

My favorite image of the night is of the two of them after Joe caught the garter.  Tell me, do you see the resemblance too? 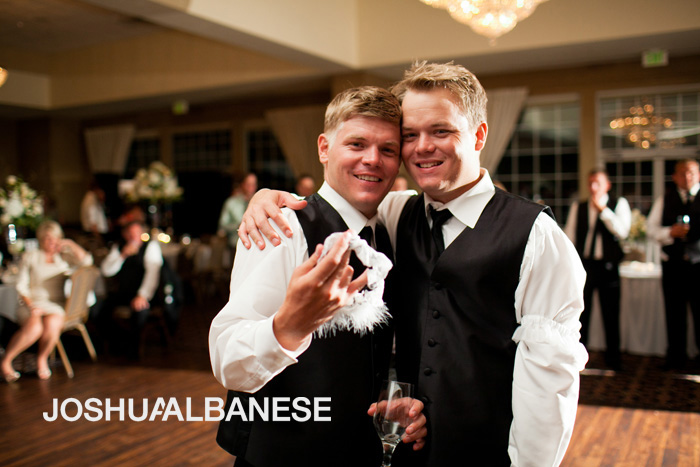 If you are looking for a wedding photographer in Chicago, or Northwest Indiana, to capture the memorable moments at your wedding, and interested in our availability and pricing, please drop us a line using the online inquiry form here.