When Joel first came to us with his plans to surprise his longtime girlfriend, Christine, with a proposal in Grant Park and asked us to capture her reaction and response, we were incredibly excited.  This was our first time shooting a proposal – a surprise, no less – and we had far too much fun planning our strategy and posing as typical tourists so that we wouldn’t blow our cover.  We felt like James Bond and Carmen SanDiego – it was awesome!  Christine pulled up in the cab and followed the trail of rose petals to the courtyard where Joel was waiting.  With giant umbrellas sheltering them from the light rain, Joel asked Christine to be by his partner and wife.  They then celebrated their engagement with all of their closest family and friends at an epic party in the Signature Room at the 95th in the John Hancock Observatory.

Although Joel’s career at Tiffany & Co. took them out to Denver, Colorado soon after the engagement, they decided to hold the wedding celebration in Chicago – home to their hearts, histories, family and friends.  And since we all clicked so well during the proposal photography (pun totally intended), we were asked to document their wedding day as well.  Yay! 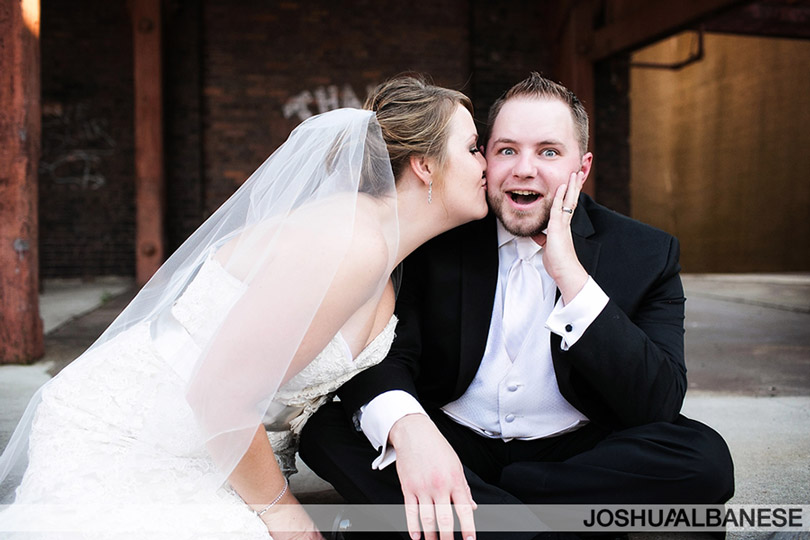 When we arrived at the Lincolnshire Marriott Resort on a gorgeous early-fall morning, we couldn’t wait to see Christine and Joel and to catch up on everything that had happened since their engagement the previous summer.  Denver seems to be treating them well and they were full of excited anticipation for the day’s festivities.  We found Christine in her room, surrounded by her ladies and joking with her best friend while Maya from Alluring Artistry gave her a beautiful, vintage-glam look.  With her smoky, dramatic eyes and nude gloss, we thought she resembled the British songstress Adele.  We knew from the previous summer that Christine is a girl with finer tastes, and her chic wedding day accessories were just begging for their own moment in the limelight.  Her ‘Something Blue’ – these stunning Badgley Mischka peep-toe pumps – were the perfect choice to have peeking out from the scalloped lace hem of her Alvina Valenta gown. 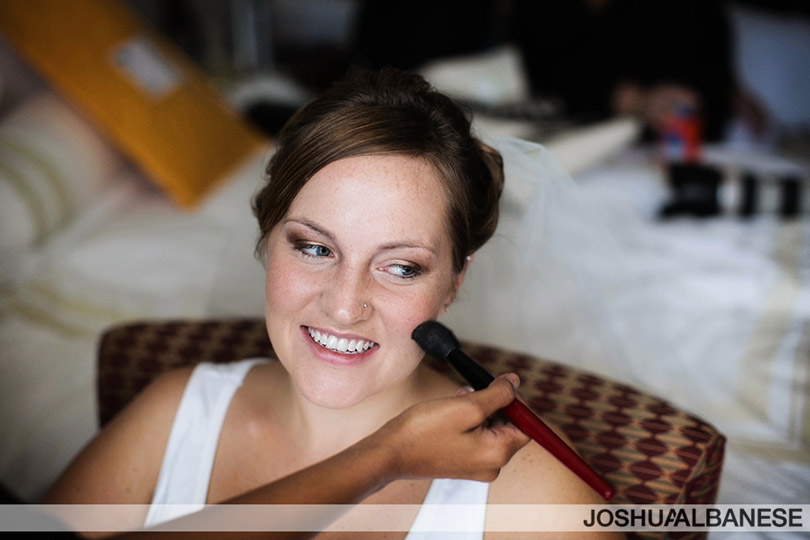 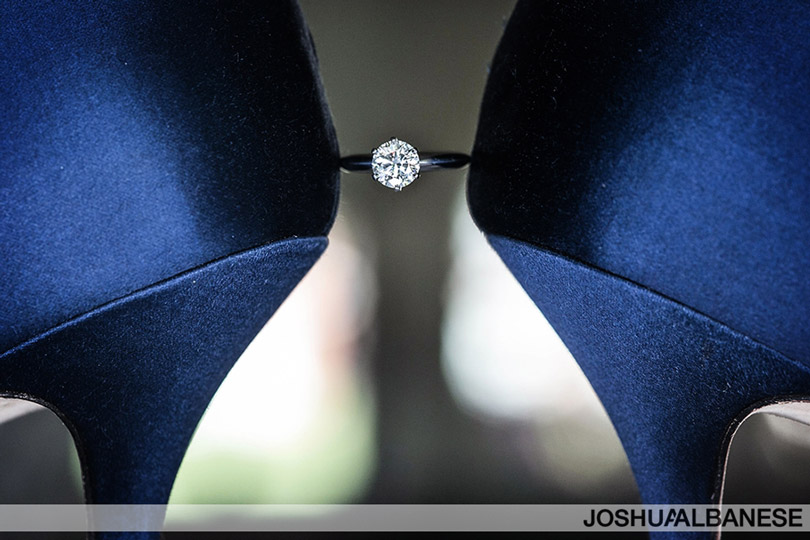 While the ladies were enjoying mimosas during their flurry of activities, Joel was on the other side of the hotel having a relatively more peaceful morning.  Guys are blessed with simpler preparations, giving Joel more time to relax and spend time with family.

With the fastening of suspenders and one final makeup check, Joel and Christine were ready for their First Look.  The grounds at the Lincolnshire Marriott are extensive and we found a perfectly secluded spot off the horse trails near the creek.  In a moment reminiscent of their proposal, Joel waited patiently as Christine arrived – no peeking!  She smoothed out the front of her dress, gathered up her train, and took a deep breath as she made her way to her waiting groom.  A smile crept over Joel’s face as he heard her approaching, breaking into a full-on grin as she slid her arm around him and nuzzled into his cheek for a kiss.  They then took a few moments to admire each others’ attire and share stories about their mornings, including Joel’s hilarious shoelace fiasco (thankfully they weren’t his shoes), before we headed off for some romantic portraits in the dappled sunlight.

With blue skies overhead and the warm sunlight shining down, guests arrived at the Lakeside Pavilion and added their earthy contributions to the buckets at the entrance before being seated in the gorgeous Chivari chairs for the ceremony.  Joel and Christine chose to personalize their commitments to each other and included ring-blessing from their guests as well as a Mothers’ Tree Ceremony that incorporated the earth that each guest had brought from their homes, with the tree to be planted in the yard of Joel and Christine’s newlywed home.  After the couple was pronounced husband and wife, the guests were invited to enjoy an extravagant spread at the cocktail hour that included crab legs and oysters on ice.  Our mouths are watering just thinking about them.  😉

While we were out taking photos with the bridal party, the Lincolnshire Marriott staff was busy transforming the tent into an elegant reception space.  The Meetinghouse Companies provided the lush hydrangea centerpieces that complimented the rich hues in the girls’ bouquets, and the table names were the perfect accent to the bark trim on the cake.  Joel and Christine also chose to up the sweetness-factor by including a tasty candy buffet, which was a huge hit with the younger crowd.  Family and friends were then invited inside where they were treated to a delectable dinner to match the appetizers (Joel, you were so right about the excellent soup!)

After dinner, Joel’s best man delighted everyone with his toast, including some advice for Joel and Christine that was so good we had to remember and share it here:

Glasses clinked in celebration and joy, and everyone filled the dance floor to party the night away.

Because Joel and Christine wanted to spend as much time as possible with family and friends at the wedding, we chose to do a Day-After Bridal Session with them throughout downtown Chicago.   It was great being able to spend some personal time with them before they left for their honeymoon and returned home to Denver, and we captured some amazing photos at a few of their favorite landmarks.  By the end of the day, the clouds had rolled in over the city and we finished our session the way we started this journey together – with giant umbrellas shielding us from the raindrops.